← By The By Go See: Viola Podkopaeva →

Andrea Crews is on a roll. Indeed, the French brand, which was conceived as an art-and-fashion collective in 2002, has recently staged a string of terrific shows, including for Spring-Summer 2016, photographed here on the young French rapper Issa Smith. Though she made her name thanks to her recycled vintage clothes, Maroussia Rebecq, the label’s founder, now offers more polished streetwear — which doesn’t mean that the feisty Bordeaux-native, who notably staged a Burning Vogue art performance a few years ago, has lost her verve.

We caught up with her to discuss that collection, her projects, and the current state of the fashion industry.

How did the idea for this collection come about?
This judo-themed collection was started a year ago. You have to know that Andrea Crews is actually a French brand with strong ties to Asia. There is a majority of Asian women in my team — I myself pretend to be Asian. They even created a gang, called Yellow Ghetto. The collection started with the idea of belts and Dan colours that change in judo. So we mixed all the belts together, so that the strongest can be seen next to the least strong. In our collections, we talk a lot about ourselves and our own history. It’s about a sense of balance between all our skills.There are a lot of white, highly technical fabrics in the collection. It’s also about sportswear and oversize shapes. The prints are a mixture of several judo and Tae Kwondo club logos. There are also a few kimonos. It’s a very unisex collection.

Do you practice judo?
No, I bike and do yoga. I was interested in the aesthetic and the values of judo.

Why are there mostly girls in your team?
Even if we’re a unisex brand, we’re a group of girls. We love boys, but there is something very feminine about it. Angie, who is the studio manager, is Vietnamese. Son is Thai. Sun is my muse. She’s a beautiful Korean girl. The three have now become friends. There’s actually one boy in our group, and he’s Asian.

How is the atmosphere at work? People sometimes tend to say that all-girl environments end up meaning trouble.
There’s no fight at all. We are not girly girls, you know. We are very virile. We’re fighters here at Andrea Crews.

You started as a recycling brand. You used to make new clothes out of old ones. But I have the feeling that you’re more into new creations now.
We’re more about upcycling now. We still transform clothes, except for this collection, although we transformed judo belts. In fact, the brand started by transforming vintage pieces, then stocks of new clothes. Now we create new pieces. The brand was started in 2002 as an artistic project at the Palais de Tokyo. It was a very open brand, a social manifesto. Our 10th anniversary marked the end of the 1st season, just like in TV series. Now we’re starting the second season. We asked ourselves: “what’s our DNA? How can we transform the brand?” So we focused on unisex sportswear and got rid of the thrift find part, but we still do clothes transformation.
We also did a major restructuring of the brand. We’ve grown now. We created jobs for the people we needed.

Your latest collection, for Fall-Winter 2016-2017 was also particularly strong.
We were inspired by carpets. It was about the Barbes and Château Rouge neighbourhoods of Paris, in the 18th arrondissement. I like the mixture of people and genres in Barbes, which also offers a striking example of street fashion. People generally have this preppy image of what a Parisian looks like. Barbes offers a more popular version of it. It’s about a huge crowd. We wanted to show the other Paris.

There’s a lot of debate about the current state of the fashion industry. What’s your opinion about it?
Fashion has become very complicated. It has become a real headache. The creative process period is magical. It’s about passion and pleasure. The rest, the production, the delivery, etc… is very complicated. Thanks to our DNA, and because we stage shows, we can instantly sell a few pieces from the collection, but as designers, we don’t have the budget to produce the clothes before the clothes are shown on the runway.
Another system would be to leave the store system, so that we lower the margins. We have our own shop, and also our own internet website. We have a strong young fan base, but the system prevents them from buying our clothes.

Do you still do your art performances, like the one in which you burned copies of Vogue?
I do it on occasions. Burning Vogue was a performance. It was an art project. It was a totem of magazines, it was more about burning advertising pages. We did it in June a few years ago, in the countryside. Peasants danced around the fire.

Do you dress a lot of celebrities?
We work with celebrities, although they are not your usual Closer celebs. We dressed Rihanna and Chris Brown, The Game, Nekeu, our style is street-influenced and young. We work with a lot of rappers, actually.

Any new projects coming soon?
We’re gonna do a metaphoric refugee camp, there will be a huge buffet on 26th June in Piacé le Radieux in the Sarthe region. We also often do art events in our Galerie Le Cœur, on 83 rue Turenne in the Marais neighbourhood. We opened it so that Andrea Crews would be more about fashion.

Are there things, people, or trends that inspire you right now?
I’m just back from the Hyères Fashion Festival. I liked many of the photographers in the competition. The fashion laureate, Wataru Tominagu, presented a beautiful craftsmanship-meets-couture collection. We’ve entered a new, more spiritual era. As a consequence, we have to think differently. Offer something more soulful, and less things, also. 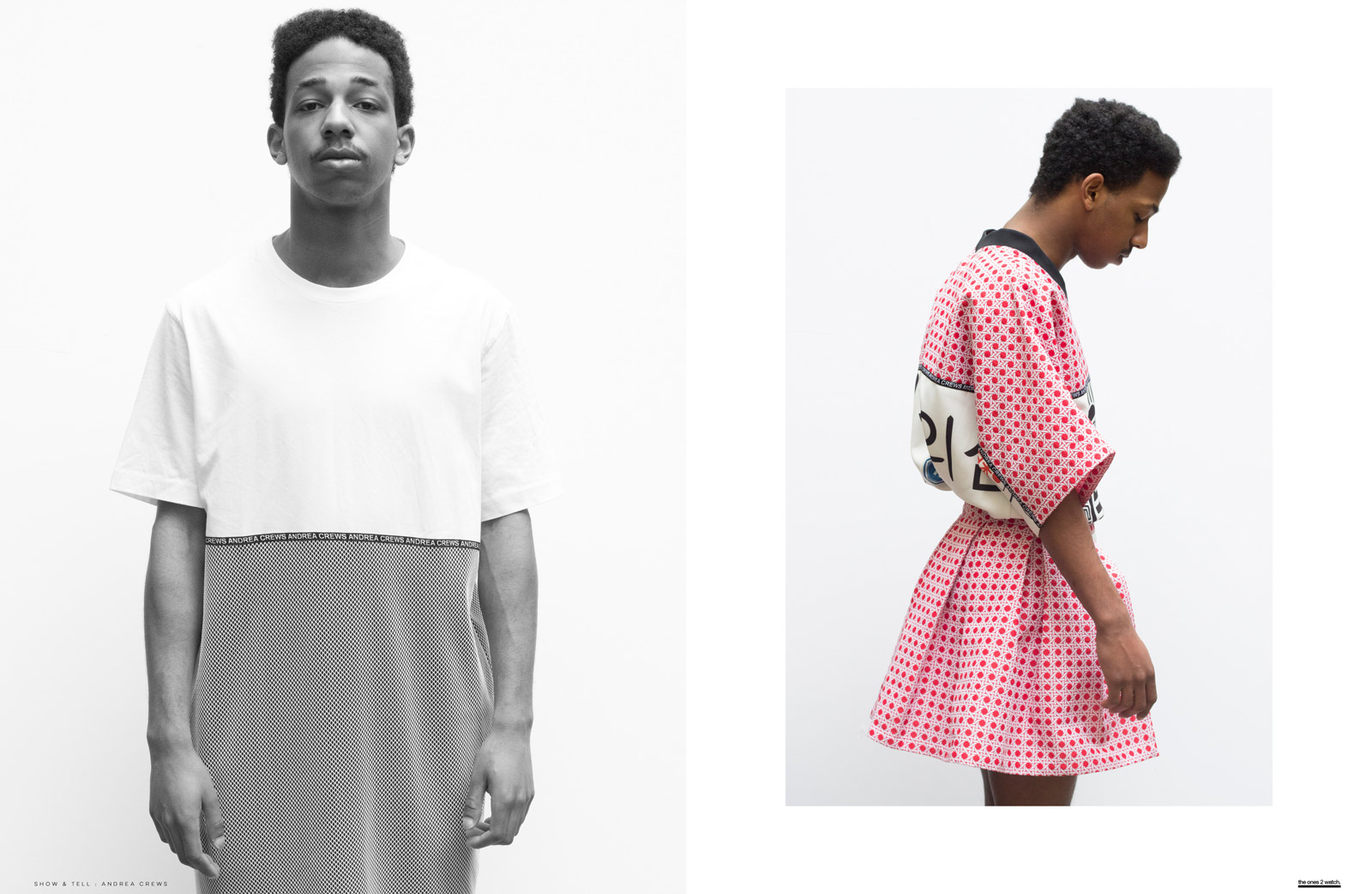 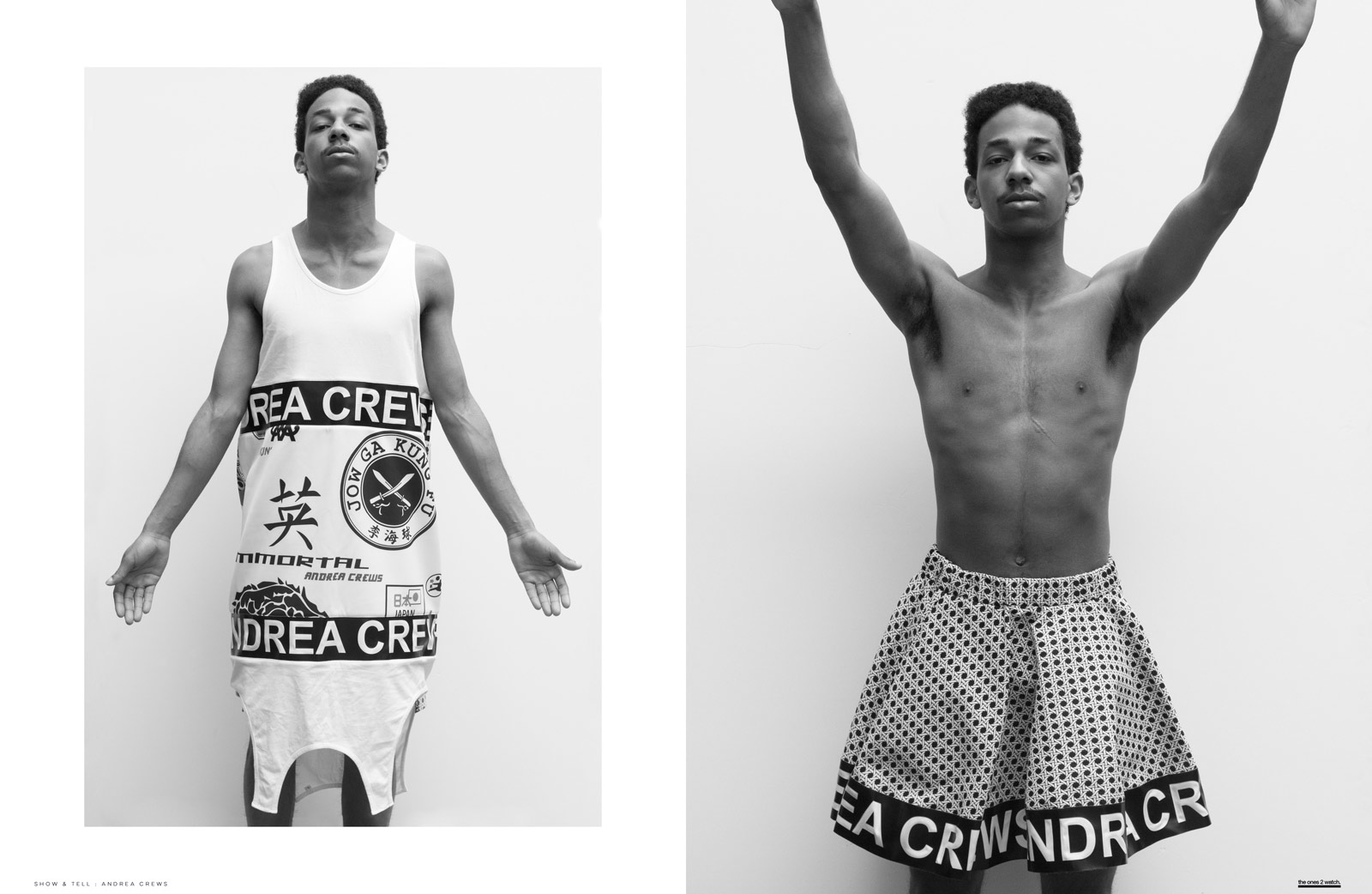 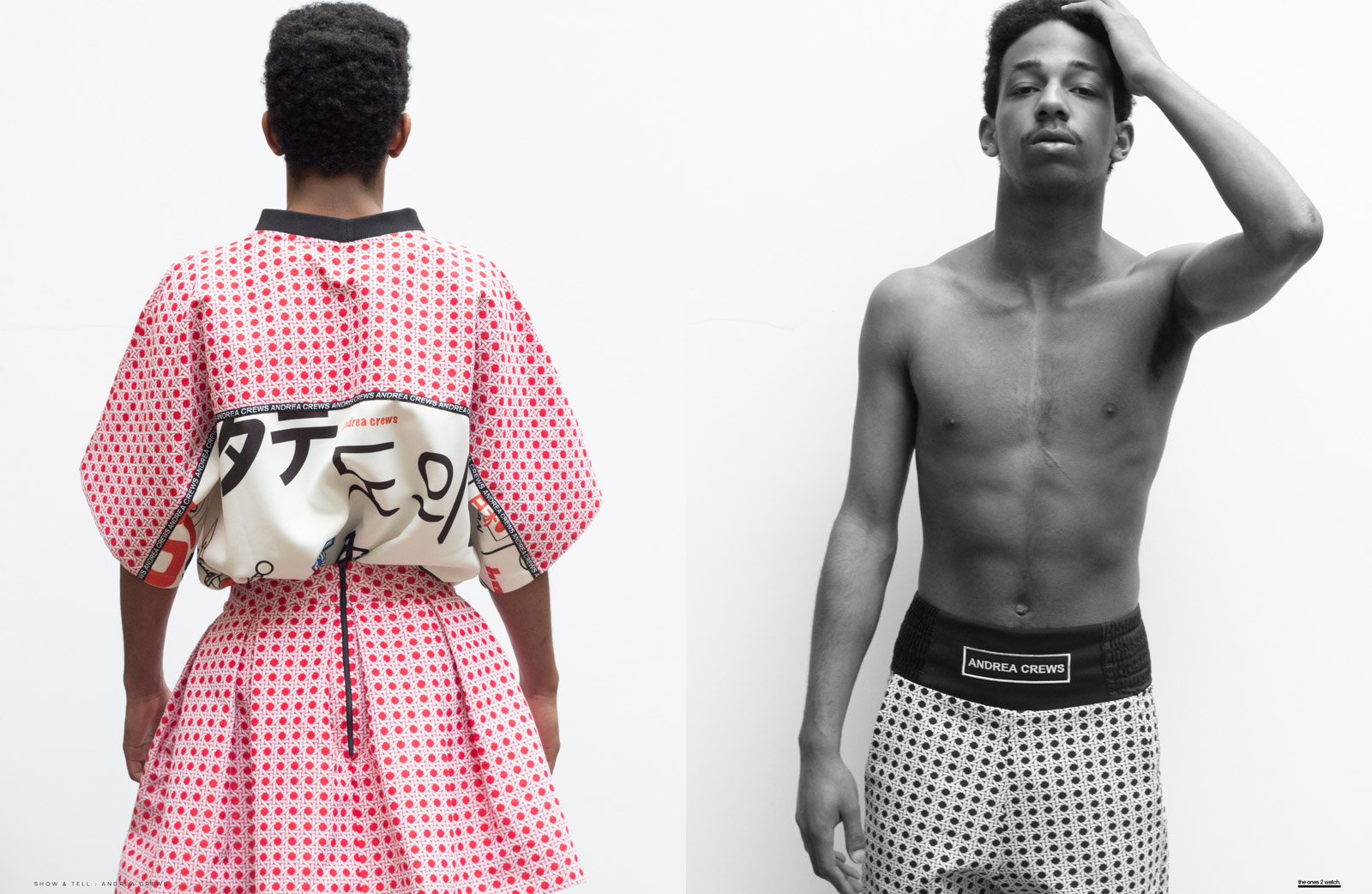 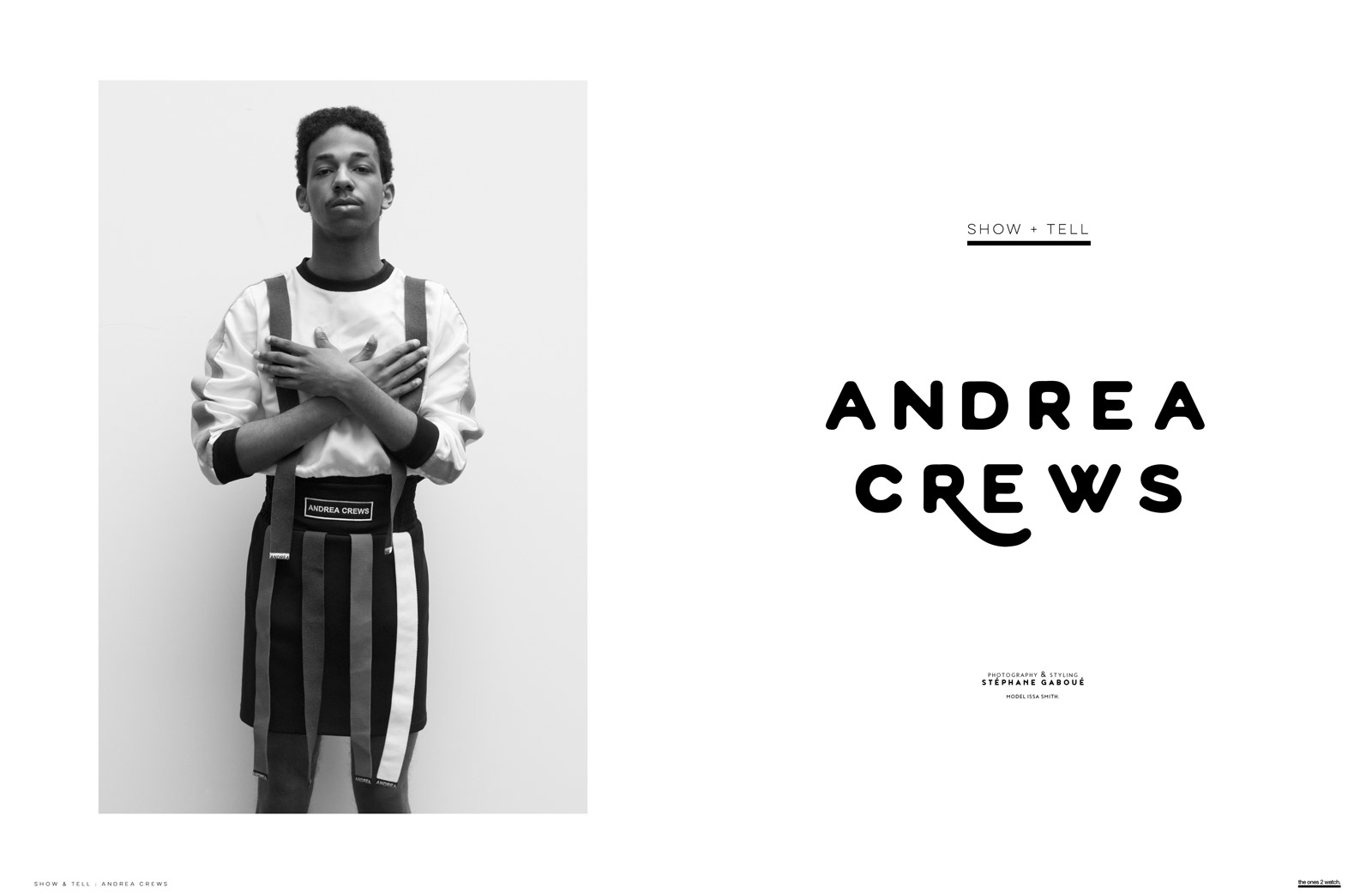